Free Delivery On All Order Over €50

How it all started.

Photofast started in 1985 by Félim O'Connor, providing fast film developing ,wedding and studio photography. After the first year in business, cameras and accessories were add to the range and slowly it grew to be the main supplier of print developing and cameras in Sligo. Along with the shop, the studio and wedding photography went from strength to strength. For example Felim O'Connor LIPPA was the 1st photographer in Ireland to win 7 awards in a row. Felim had covered weddings all over Ireland, from north Donegal to Dublin and every where inbetween.

Photofast continued to expand its' range of services and embraced the new digital age, allowing customers to order online or through their phone. The website was successful and new products were added to fill a gap in the Irish market. The wedding charms and fit a photo into a locket were an example of  this and  drew customers from all over the world.

Another niche market was film developing and Photofast continued to provide this service to an expanding young international market. It became one of the leading film developing lab in Ireland.

Now Photome is a new website, run by Eoin O'Connor and dedicated to wedding charms and photo albums. By having a specialized website Eoin and Félim can concentrate on providing the best quality charms to the discerning bride. All personalised bridal charms are hand made by Eoin and Félim and finished to the usual high standard.

Eoin has also specialised in “old school” photo albums where you can slip the photo into the page. Photome.ie is now Ireland’s one stop shop for all types and styles of photo album. 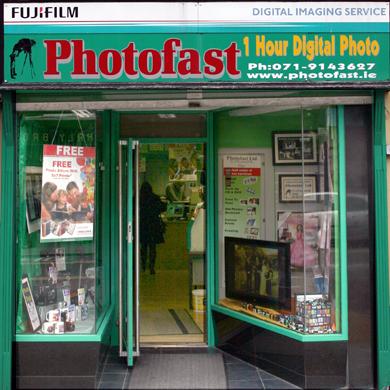